On January 25, 1995, I interviewed my Aunt Ozina to learn more about her. Ozina Cora Marotte was born on August 15, 1908, to Alphonse Arthur Marotte and Lovina Theroux on Aug. 15, 1908, she was the oldest of 9 children, with my mother, Claire Virginie Marotte Brisson, being the youngest with almost 19 years apart.
She spent most of her life helping others and became a Registered Nurse in 1934. She also helped the Red Cross as a nurse. 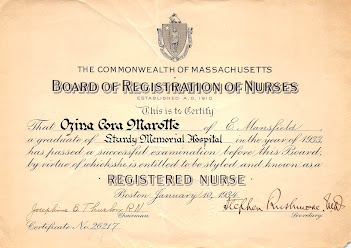 Her father, had the first Model T that did not need to be cranked, and she learned to drive in it.
She shared with me about her mother Lovina Theroux, and how she played the piano and had a green thumb. She would see a plant along a path that looked like it was dying, bring it home and nurse it to good health. When she got too old to have any more children she was very upset. Unfortunately, her mother passed away in 1945, Ozina had just turned 37 and had been married for five years to Eugene Baron, they were married 20 June 1940 in Mansfield, Massachusetts where they lived for many years. 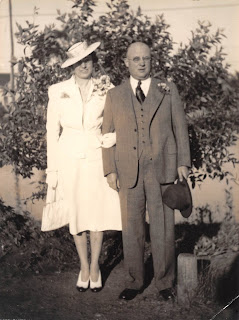 Ozina was an accomplished organist, and in June, 1979 she became Grand Organist of the Eastern Star.
Not having any children of her own, she was like our grandmother as Lovina had passed away before we were born. She outlived two husbands, Eugene Baron and Dexter Stripp.
She taught me how to knit, and crochet using string, and sew my own clothes by helping me make my high school prom dress. She made many sweaters and gloves for us over the years. Whenever possible, we would play cribbage and Scrabble together, go blue berry picking at her summer home, made the best blue berry muffins. We learned much about life from her as she shared of her own life experiences. Whenever we play either game, we always think of her and Uncle Gene. Eugene died in 1969, and she remarried Dexter G. Stripp on 16 September 1975, he died 22 January 1984.
She is missed very much and were blessed to have had her in our lives. She is buried at Spring Brook Cemetery in Mansfield, Massachusetts with her first husband, Eugene Arthur Lewis Baron, and her mother-in-law, Annie Baron Slater.
Remembered: Ozina C. M. B. Stripp 1908-1997
Updated: 15 Aug 2021
Posted by TheLadyClaire at 7:28 AM No comments: