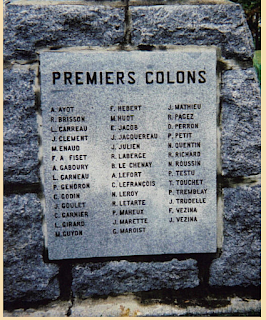 This part of the memorial to the first French Colonists who settled around  L'Ange-Gardien, Quebec, Canada which is located 10 miles northeast of Quebec City on the north side of the St. Lawrence Seaway. (Courtesy of Roussin.org)

Rene Brisson was born about 1635 in St. Xainte, La Rochelle, Aunis, France. Records from this time period are scarce and it is thought his parents were Pierre Brisson and Marie Navarre, others say that his father was Jacques Brisson. Not much else is known about the family he left behind to settle in Quebec, Canada by this author at this time.

It is known that Rene Brisson sailed in the spring of 1664 on the ship "Le Noir d'Amsterdam" under Captian Pierre Filly who was from Dieppe. The ship was a fishing vessel and to improve the return on investments they added 51 passengers. Rene was among 50 young men hired to work in New France as it was a time of recruiting individuals to help build 'New France'. There was also one female, Jeanne Benart. Besides Rene Brisson there were others who helped to settle the area; Nicolas Fournier, Andre Gautron dit Larochelle, Mathais and Pierre Champagne and Jean Beaudet. From the passenger list only 42 are identified (1). On May 25, 1664, the 100 ton ship docked at Quebec. You'll note most of these names along with many others were some of the "First Colonists" who helped to settle Quebec.

Rene was a baker and did very well in Quebec. He married Anne Vezina in 1664 in L'Ange-Gardien, Montmorency, Quebec, Canada after signing a marriage contract on September 6, 1663 in front of Mr. Paul Vachon dit Pomerleau.

Together they had  ten children but three died very young. They lived off the coast of Beaupre, Montmorency, Quebec, Canada and had four boys who helped to carry on the Brisson name. He died in 1698. The number of descendants this couple has had since their marriage in 1664 is truely amazing, there is no field this family has not entered into and been successful. Their descendants live in many places all over the world.

Rene Brisson is my 8th grandfather and my pioneer ancestor!


Posted by TheLadyClaire at 10:15 PM No comments:

Labels: Brisson, France, Quebec
Newer Posts Older Posts Home
Subscribe to: Posts (Atom)
Do you have an interesting story of an
ancestor that you want remembered
through time?