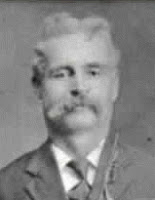 Laurent Plante was born 6 Aug 1856 in St. Lazare (Bellechasse), Quebec, Canada to Francios David Plante and Marie Henriette Trahan. He was the fourth child of seven children and spent most of his life living in Canada.

In the 1871 Canadian census he is living with his family in Levis, Notre Dame de la Victoire and working as a cultivator. On 26 Nov., 1877, he married Marie Ruel in St. Charles (Bellechasse), Quebec, Canada.

The 1881 and 1891 Canadian Censuses have them living in Sherbrook, this is where all their children were born. Together they had seven children: Joseph, Peter Honore, Jean Baptiste, Louis D., Julia Anne, Emile J.,  and Joseph Oliva.

The 1901 census states they were living in Acton Vale where Laurent was a foreman on a farm. Joseph is listed as an electrician, Jean Baptiste is listed as a 'cordonnier' which is a cobbler (a shoe repair person) while Louis is going to school. 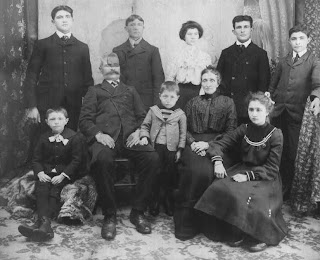 According to the 1910 US Census, the whole family moved and settled in Providence, Rhode Island sometime during 1904, however, on 24 December 1908, Marie Plante, his wife passed away leaving hin a widower. He worked on the railway as a laborer to keep his remaining family of four children together. By 1920 he is living by himself and working in the cotton mills for support.
His daughter Julia Anne, the young girl in the front on the right married Omer Joseph Brisson, Sr. on October 31, 1910 and are my grandparents. Family legend states that Laurent was quite tall and one can see from this family photo that he seems to be so even in his arkward sitting position for this picture.

Laurent Plante passed away on 31 July 1928 and is buried with his wife Marie in St. Ann's Cemetery, Cranston, RI. He was a hard worker who was there for his family every step of the way.

Posted by TheLadyClaire at 11:50 PM No comments: 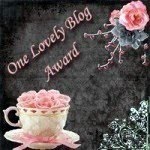 It is nice to know that people read my blog articles about those who have had gone on before and interlaced our lives for the better. It is fun to be chosen and thank you to one of my followers, Sonja at Tree Climbing with Grandma Sonja whose link is http://treeclimbingwithsonja.blogspot.com/.

I also enjoy her post along with many others. The rules of acceptance are:
1. Accept the award, post it on your blog together with the name of the person who granted the award and the blog link.
2. Pass the award on to 15 other blogs that you've newly discovered or just love so much.
3. Remember to contact the bloggers to them know they have been chosen for this award.

Chosing 15 blogs is going to be interesting as there are many good ones! Thank you!

12. Genealogy Tip of the Day

13. Shades of the Departed

15. The Educated Genealogist
Posted by TheLadyClaire at 7:26 PM 3 comments:

Labels: ancestors, family history, Lovely Blog Award
Newer Posts Older Posts Home
Subscribe to: Posts (Atom)
Do you have an interesting story of an
ancestor that you want remembered
through time?