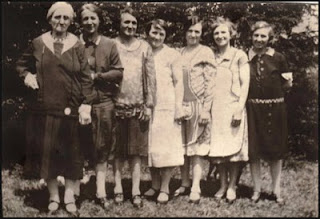 Rose DeLima Limoges was born  3 Nov 1859 in Lake Champlain Valley, Quebec, Canada to Benjamin Limoges and Catherine Aubin (Lambert).  She was the 3rd child in a family of 8 children and loved the water.

She married Alberic Theroux on 16 Apr 1882. Alberic was very athletic and for the first few years of their marriage they lived aboard a friend's yacht as he was employed as the captain of the yacht.

After the loss of her first child, they settled in Pawtucket, Rhode Island and had nine additional children; 6 girls and 3 boys with 2 of the girls being a set of twins, Annetta and Henrietta, known as Anita and Rita.

Rose was a very intelligent woman and became a midwife delivering many of her own grandchildren. She was considered to be a healer and would often be sent for in an emergency rather than a doctor.

She believed in education and snet her children to "french" and "public" schools to make sure all of her them knew both languages fluently. In addition she loved music and made sure they all had music lessons. This love of music has passed down through to the current generations and will surely continue with many who play various instruments as well as participate in various types of choruses.

Her last pregnancy was overshadowed by the untimely early death of her husband who use to fix the looms in the cotton mills. He suffered a heart attach on his way home from work and remained unconscious for several days before passing away on 26 Jan 1902. A couple of months later, her last child was born on 14 March 1902 but only lived till 24 Aug 1902. It was a difficult time for her as she was now responsible for the remaining 8 children, no husband and having to deal with the loss of another child.

She was an excellent seamstress and would do all she could to make ends meet. Many of the children got odd jobs to contribute to the family's survival and survive they did. Many of her children went on to become successful in a variety of fields and all had many children. She remarried later in life to Alcide Paquin who also preceeded her in death.

After living a life of service to all she passed away on 7 Jun 1942 and is buried with her daughter Lovina Theroux and her husband Alphonse Marotte along with four of their children in Pawtucket, RI.

Posted by TheLadyClaire at 11:41 PM No comments:

Labels: Canada, Limoges, Paquin, Pawtucket-RI, Therouc
Newer Posts Older Posts Home
Subscribe to: Posts (Atom)
Do you have an interesting story of an
ancestor that you want remembered
through time?