"Auntie Laurie" as she was so fondly known by her family in Australia was born 2 July 1900 in Lyndhurst, Hampshire, England. She is the daughter of Arthur Edward Hemestretch and Alica Charlotte Holes. She was the first of three children, Ethel May and Arthur Edward were her siblings. Unfortunately, her mother died when she was 5 years old. In the 1911 census her father and her sister, Ethel, are living with her father's brother James and her younger brother is living with her father's sister Laura Sims and her husband Stephen.
During her lifetime she cooked for many prominent people including Queen Elizabeth II. On July 2nd, 1945 she married William David Nicholls as a war bride. As he was still in the military at the time of their marriage he rejoined his military unit and later Laurie arrived in New South Wales on a 'War Bride Ship" to join her husband along with many other women at that time. I'm sure this ship with its precious cargo of 'young war brides' was well received by the many military soldiers anxiously awating their arrival!
They never had any children and resided in New South Wales, Australia to be near family. Over the years Auntie Laurie and Uncle Bill became the focus of many family gatherings as he would have war stories to share and she would tell of times she cooked for the queen. Of course her cooking skills were always admired as she prepared many a meal "fit for a queen" whenever you would visit their lovely apartment. She never forgot her "English" heritage and was very proper in every way.
She always had time to cook and chat and be a part of all the family gatherings where she would always bring a great culinary treat to share. Our young children had a special relationship with them and we would have them over for dinner.
Here is a picture taken Christmas, 1979 with Auntie Laurie on the left, Grandma Gimson in the middle and Uncle John Nicholls (brother-in-law of Laurie) on the right with all six of our children. All had a wonderful time together. 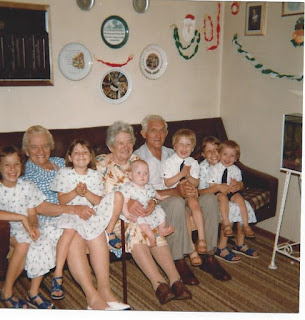 In 1982 she became seriously ill and while she had the best possible care, she passed away on 29th October. I had the opportunity to visit her before she passed away. It was a somber time, she shared knowledge of her parents, siblings, and such so it would be written down into the family history.
She had a way of making everyone feel like they were a queen or a king and her kindness and love will be remembered forever.
She will always be in our hearts!
2 July 1900 - 29 October 1982
Updated 11 December 2020
Posted by TheLadyClaire at 12:21 PM 2 comments:

Labels: Hampshire, Hemestretch, Lyndhurst, NSW-Australia, Queen-Elizabeth-II
Newer Posts Older Posts Home
Subscribe to: Posts (Atom)
Do you have an interesting story of an
ancestor that you want remembered
through time?